Kickidler per year for 10 licenses
Price
Go to site
Test

Teramind per year for 10 licenses
Price
Go to site
Test

ActivTrak per year for 10 licenses
Price
Go to site
Test

StaffCop per year for 10 licenses
Price
Go to site
Test

Hubstaff per year for 10 licenses
Price
Go to site
Test

Pros: This software is a good set of tools for employee tracking and information security provision. It can record desktop activity video and give a full analysis of websites and apps that an employee visits and uses during working hours. It even engages some machine learning on the basis of user behavior patterns. On the whole, if you spend time on settings configuration, this program will be a useful tool for your business.

Cons: Interface is outdated, and customers often complain about support service. We also would like to mention that machine learning here leaves much to be desired. It’s easier to customize it yourself. Machines still have a long way to go till they learn to truly comprehend people, in our subjective opinion. Moreover, this software does not provide for cloud server hosting.

Our opinion: Veriato is a professional tool for professional use. Though difficult to install and configure its settings, this soft boasts a wide range of options. If this soft developer nails somehow its machine learning ability, this program will be just priceless. Probably it has a great future! 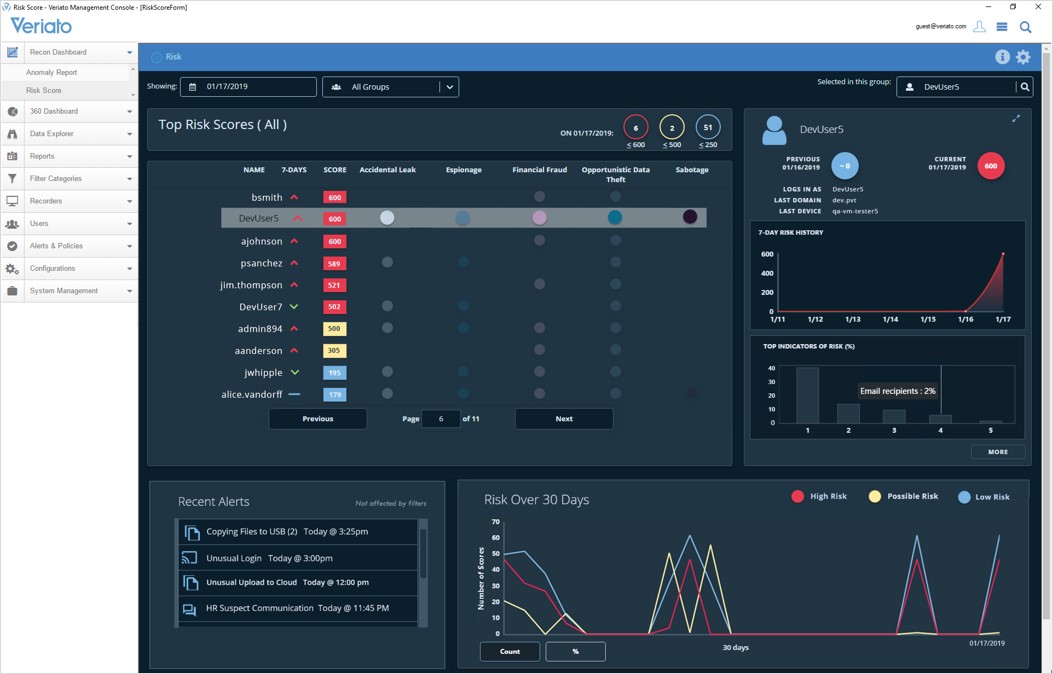 Veriato Cerebral, (aka Veriato 360) is one of the very early companies in the computer monitoring industry, the first version of the product was released in 1998. A huge number of companies around the world use these tools for tracking their employees.

A pretty powerful software for keeping tabs on almost every aspect of computer usage, whose developers boast an extensive toolset helping managers to stay in the loop on what their staff is doing.

Veriato, despite being one of the thought-through solutions on the market, is pretty comprehensive as well, and it might take a while to get the hang of it. 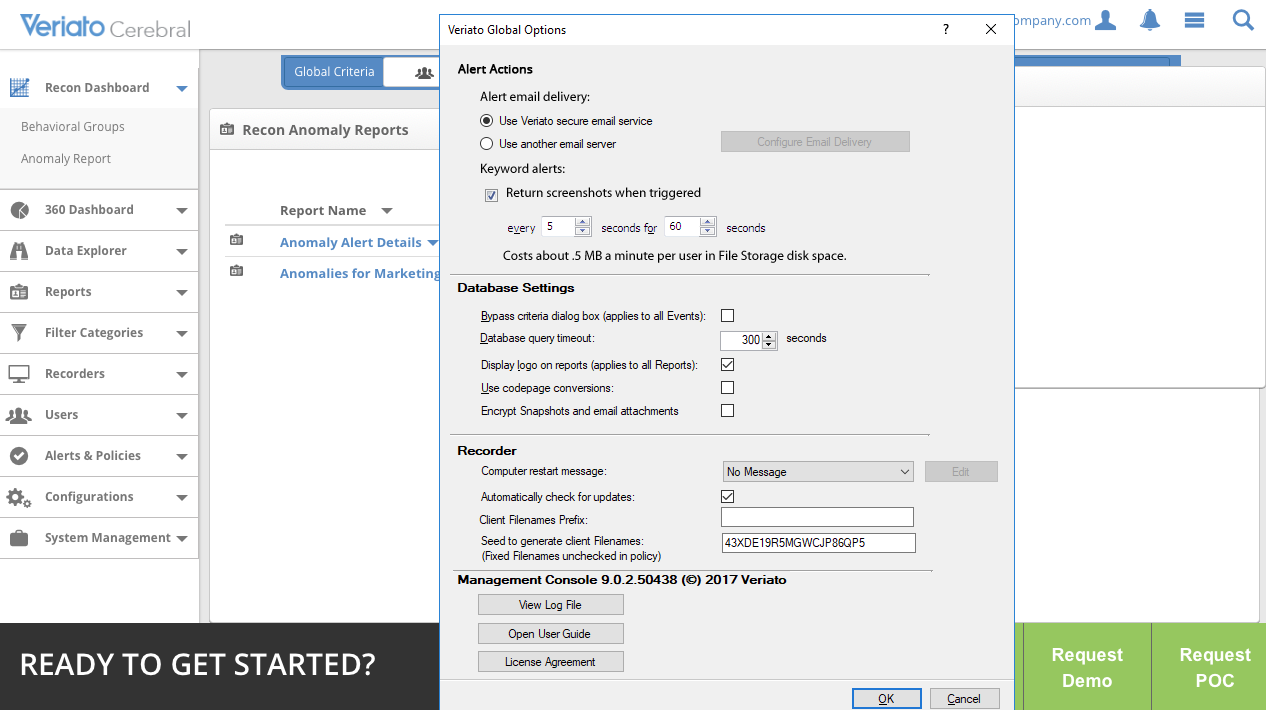 The overview of the interface

In this respect Veriato Cerebral is not like the other products – its owners don’t charge a fixed fee. Clients have to submit their contact details to get an estimate price from the Veriato sales team.

There was a request sent to the team of 10 employees for a test. Veriato representatives replied quickly, on the same day, saying it would cost $1,200 a year to monitor 10 users, which translates to $10 per user/month. Thus, the start-up fee is $95 per person a year. In the way, the more employees you’ve got, the less average cost you’ll have.
Veriato primarily targets companies with more than 50 users, but currently, the developers of the software are working on another version for smaller teams.
So, it’s not the most high-priced product around – with a standard cost per seat about $7.92 a month.

It’s a full-fledged solution for monitoring that consists of a set of tools, including some advanced features that will tell you about all the nuts and bolts of the workforce’s actions, their behavior, and device usage.

The distinguishing aspect of the software is its interface that consists of a dual mechanism, which enhances the monitoring – one comes from another. The program is installed on the user’s computer to track every single action that occurs on it, serving as the first level of protection.
It records activities in apps, including messaging ones, and websites, logs emails, printed documents, and files dropped to the USB drives.

Veriato also contains a keylogging capability that guarantees that any keyword typed by employees is secured and drilled down.
After the information has been captured, it’ll be analyzed.

This software allows you to fast-forward the video record of your staff activities during the day, and look through all the important events.

The degree of control may be set up for specific users or groups of users, it literally provides an investigation level deployment for picking up every piece of information possible. They're less invasive procedures that could be applied for the rest of the staff.

Data is stored on the cloud storage or a local server, for further examination by the supervisors.

Recorders are micro-agents that are deployed to all endpoints.

The program is set up on Windows, Mac or a smartphone powered by Android.
There’s no iOS or Chromebook version – and that’s the major drawback of this product.
The built-in tool called Insider Threat Detection uses AI code to collect the information and analyze unusual employee’s actions.

Such advanced monitoring technologies might be illegal in some regions. Most of the laws guarantee employees privacy outside of working hours and offices, even when employees might be using company-owned devices.
It must be said that for the correct work of this software every component, like the server, has to be up to date.

The new version of Veriato Cerebral inherited the interface of its previous iteration, Veriato 360.
The navigation is pretty easy, even newcomers will figure it out. But since it's a comprehensive software, there needs to be a learning curve to master.

On the first screen, users will see the Cerebral Dashboard, it contains several displays where you can start to monitor productivity, grade the security or check reviews of a particular type of activity. In a way, you can choose the dashboard called Productivity – Websites to check website access by users and by the most frequently banned content. 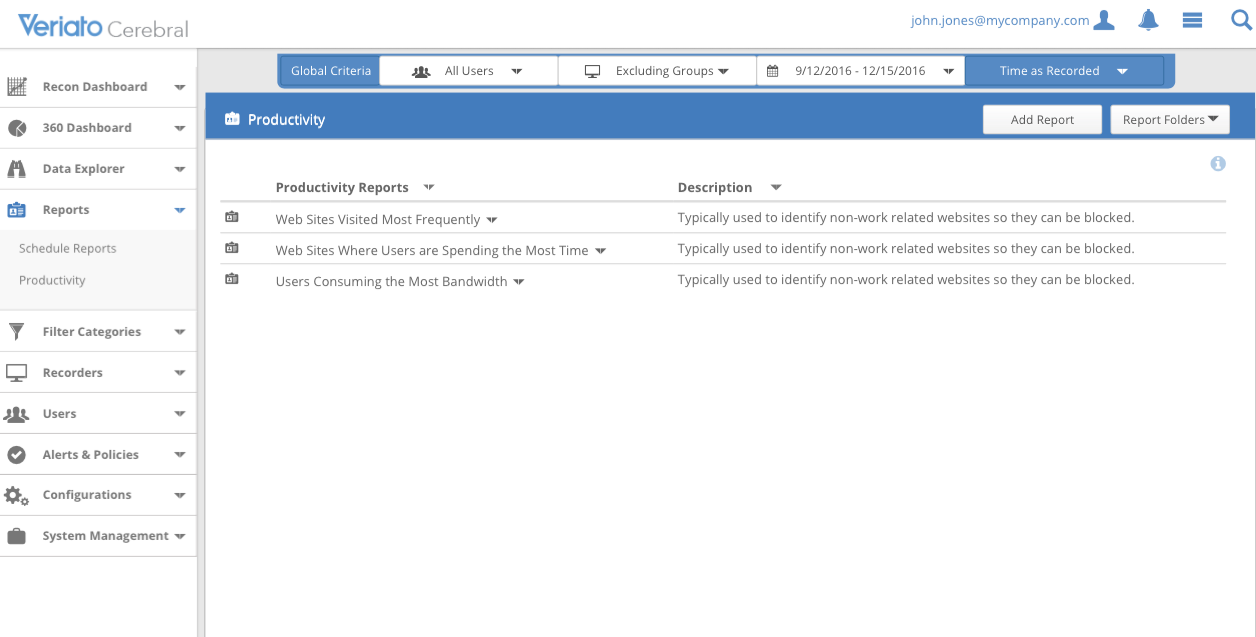 The report on productivity

There are few dropdown menus on the left of the screen from where you can access the other tools. It could take some time to fully understand Cerebral interface, but while practicing, you’ll have a great deal of control over the system setting your rules, policies, and alerts, as well as monitoring employee behavior for violations or security risks.

The data explorer feature allows managers to dive into the data on the dashboard. Using this tool they can track particular activities, users/groups of users, with the search mechanism by date, time, device, specific incidents, etc. That's a great tool to contextualize data because the system captures so much of it. The explorer feature makes them digestible.

That’s a web-based solution, unfortunately, without SSL.
The perpetrators using this vulnerability – via a hacked computer – might get the access and admin passwords, and then get their hand on everything that is on the computers with the Veriato agents installed.
The should be two-factor authentication used in Veriato for admin login, given the importance of the data.

Veriato website contains lots of statistics and other data for people looking for a monitoring solution. For instance, on average employees work less than 3 hours a day. At least this is what their website says.
That specifies neither the tasks those ‘typical workers’ could’ve been doing nor how intensive they were working during their productive hours. But anyway, what is clear is that the employees might be more productive when they are monitored.

The technical side of this product is quite remarkable. Veriato captures all the tiny actions of the employees in fine detail and provides valuable insights.
But, the major weak point of this product is that they haven’t released versions for several popular platforms like Chromebooks or iOS-devices) by now.

Pros: I had used so many other programs before. However, the best thing I like about Veriato is its accuracy. Also, the software is indeed user-friendly and provides easy access to everything. I definitely recommend Veriato if you want your company to work more efficiently.

Cons: Individual setting takes quite a bit of time, but I’m not sure it can be considered a minus of the program.